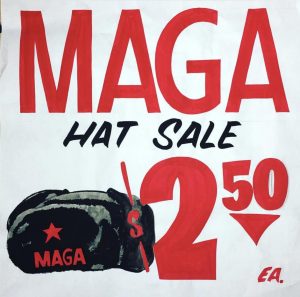 Black and White (and Red All Over): Part 3

This exhibition, Black and White (and Red All Over) is now the third version of an exhibition first held at The Bogart Salon in 2013, then at ArtHelix Gallery in 2016. It was then expanded to travel to Galleria Huuto in Helsinki, Finland and now makes its next stop in Berlin at Organ kritischer Kunst (Organ of critical Arts).
The title of the exhibition is based on the old joke of “What’s black and white and re(a)d all over?…a newspaper.” The idea is that while the works here have no actual formal connection they are, nonetheless all black and white…and can, and should be “read all over”. It’ also a way of re-thinking the “curated” exhibition -which usually relies on formal similarities- as a text or newspaper with each “article” or art work as separate entities to be read by themselves, and only held together by the concept of the black and whiteness of the newspaper itself. The show is then like a newspaper, full of content, with many different artists all addressing a range of subjects through the simple formal restriction of color. This curatorial method allows the exhibition to be broad, flexible, and precise at the same time. The omnibus approach of this show is a way to escape the exhaustion of the overly curated “theme” show. With that now hackneyed concept of groupings of artists clustered around some barely recognizable conceptual “theme”. Here the art works are clearly not related in any systematic way; freeing the art to be seen individually. By limiting the range of art to black, white, and red also, however, prevents this show from otherwise becoming a visual “mess”. From a drawing to a conceptual sculpture, from a realistic photograph to a print out of a spam message the art is left for the viewer to read and decide upon its’ value.

The immage from the header is from: Douglas Degges, Untitled 1,2 enamel and carved gypsum on panel, each 8 x 6 inches, 2015 (detail)

OKK/Raum29 is an atelier, experimental- and exhibition space, a mediating platform for dialogue which offers a place for a diverse range…
Telephone: